by kumornews
in International
Sharing is caring 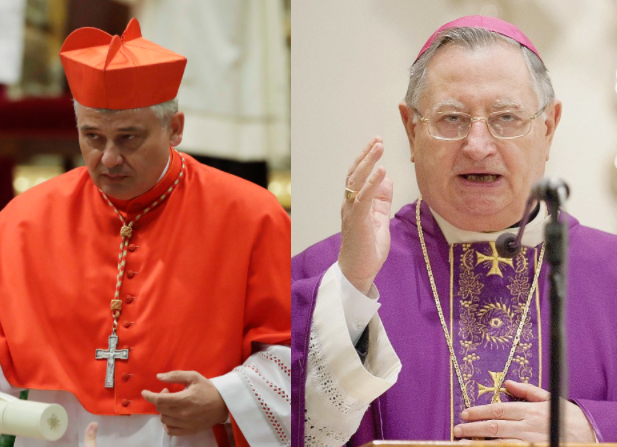 Two cardinals close to Pope Francis have tested positive for Covid-19, a day after the pontiff exchanged Christmas greetings with senior staff

Polish cardinal Konrad Krajewski, who manages the Pope’s charities and has the title of the Vatican’s almoner, ‘tested positive for Covid-19’, Vatican spokesman Matteo Bruni said.

The 57-year-old, known as the Pope’s ‘Robin Hood’ for his work with the poor and the homeless, showed symptoms of pneumonia and is being treated at a hospital in Rome.

Italian cardinal Giuseppe Bertello, 78, the governor of Vatican City, tested positive and is believed to be in self-isolation in his home in the Vatican, the source said.

The Vatican health authority is making contact with Vatican employees and others with whom the two cardinals had been in contact in recent days.

They both work very closely with Pope Francis, and Cardinal Krajewski was seen speaking to him at length last Friday, according to Il Messagero, a Rome daily.

Both cardinals were absent from the audience of Pope Francis with the Roman Curia this morning, a Vatican official who was present told America.

Three (3) Charged with the Murder of Nigerian Rapper in London

Man Curses Nigerian Leaders as He Shares His Official Receipts from 1984-92 When Primary, Secondary School Fees Were N10 and N30

Three (3) Charged with the Murder of Nigerian Rapper in London

Couple Forced Neighbors to Sexually Abuse Their Daughter, Then Tortured the Girl to Death

“I Can Live With That. He’s Awesome” – Simi Silences Troll Who Rated Adekunle Gold Above Her

TODAY YOU WILL ENJOY SUPERNATURAL DIMENSIONS OF FAVOUR

“Never! Davido Is Like A Brother To Me!” Enisa Shuts Down Dating Rumors.

“I Can Live With That. He’s Awesome” – Simi Silences Troll Who Rated Adekunle Gold Above Her